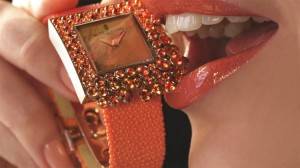 A watch brand doesn’t have to be around long to be considered luxe and fabulous, and de Grisogono has proven that.  Although this brand has started off as a high end jewelry house, they have now worked their way into watches and their timepieces are cutting edge and fabulous, especially the women’s line of watches.

The History of de Grisogono

In 1993, Fawaz Gruosi opened his first boutique in Geneva, Switzerland, which specialized in high end jewelry and called it de Grigogono, which is the maiden name of his associate’s mother.  Two years later, Gruosi left his associates to take sole control of the business and create his own collection of jewelry, which was very well received.

The Complications of de Grisogono

When you are buying a de Griogono, you aren’t buying this watch for the inner workings so much as for the outer workings, because truly these watches are a thing of beauty and art.  The watches balance the technical with the luxury jewelry making skills that de Griogono has become so famous for, so you are not only getting a watch that will run beautifully but will look beautiful while running.

The Lifestyle of a de Grisogono

This watch goes from a boardroom to a bedroom to a ballroom, but don’t take it to a beach.  This is not a watch that you want to wear while running to the store or while you are going for a swim.  But should you wear it while you are sailing on a cruise and dining at the Captain’s table? Most definitely!

De Grisogono – For Women or Men?

Most definitely the watch is made for both men and women, but I think the women’s watches are totally gorgeous and the men’s watches are just meh.  In fact, if you are going to spend that kind of money as a man, invest in a Breguet.  But, for you wife, buy her a de Grisogono, and check out some of their jewelry as well…stunning!

The Cost of a de Grisogono