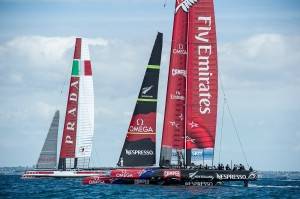 Why Watches Are Important to The America’s Cup

Because when it comes to racing in a boat, timing is everything.

When you are racing in one of these carbon-fiber catamarans, timing is crucial because one little mishap can lead to consequences that will not only break the boat into tiny pieces but could lead to injury and death of the sailors. You must know down to the second how and when to synchronize to not only win, but to survive.

The America’s Cup is Almost as Old as Time

Did you know that The America’s Cup is the oldest active trophy in sports? It is and it dates back to 1851.  But, because it is an expensive sport it represents prestige, it has not only been a proving ground for the wealthy, and it has attracted corporate sponsors such as Oracle, Prada, Tag Heuer and Omega.

The Watches of The 34th America’s Cup

Omega has never sponsored anything other than team New Zealand who participates in The America’s Cup, and has launched the new Omega America Cup Collection, which the New Zealand team will be wearing and does wear while practicing and racing.

The Omega America’s Cup Racing Chronograph has the design qualities of the Seamaster with a regatta countdown timer and a specially designed dial with a semicircle of 5 dots. This gives a constant overview of the elapsed time with a simple press of a button. The case has a large 43mm diameter, which makes it easy to read, high-precision mechanical movement, unidirectional rotating bezel, stainless steel strap or rubber bracelet with safety clasp and pushbuttons that function to a depth of 300 meters.

Tag Heuer developed a watch for team USA for The America’s Cup with Oracle, who is the boat builder for the team USA. Tag Heuer and Oracle have actually made two watches for team USA, one for on the boat and one for off.

The on board watches are wirelessly linked to the boat’s onboard computer and during the competition display real-time information, including boat speed, true wind speed, true wind direction and angle.  This is the first digital sailing watch designed specifically for a sailing team.  But, when the team is off duty, they strap on their Aquaracer 72 Team USA Watch.

This Tag Heuer has a five-minute counting function. Made in different colors the counting indicator of five windows at the top of the dial can count 5, 10 and 15 – minute periods.  It has a black dial and black ceramic bezel marked with the inscription Countdown with a round steel case with a diameter of 43 mm. The watch is water resistant up to 500 meters.

Louis Vuitton is also in the hunt by coming up with a new watch, but honestly, I can’t take it seriously, as it’s not a sports watch that I would wear sailing.  I think for the house of Vuitton, having the prestige of the cup is what keeps them in the race!