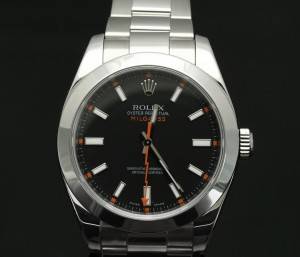 How can you NOT love a watch that has an orange lightning bolt for a second hand? The Rolex Milgauss is such a fine watch. Here’s what’s so cool about it. It not only looks fantastic, but it really is a neat watch with a very interesting history. I bought my Milgauss because I loved the heft of the watch and the way it looked. I’ll be honest and admit that I knew nothing about the science behind the watch when I purchased the watch. I owned this watch for about 2 months when a customer begged me to buy it off my wrist. Will I buy another one? Absolutely.

The History of The Rolex Milgauss

Introduced in 1956 by Rolex, the Milgauss was designed as an anti-magnetic watch for people who worked in power plants or medical facilities or labs where electromagnetic fields can throw off the way your watch tells time. A gauss is a unit of a magnetic field and mille means one thousand, thus the name Milgauss because this watch can withstand a magnetic flux density of 1,000 gauss.

In 2007 Rolex brought the Milgauss out of retirement with a new and improved version. The Milgauss has a shield made of ferromagnetic alloys that is screwed to the Rolex movement and to the case to protect the movement. This watch comes with a white dial or black dial with a standard colorless sapphire crystal. The GV (Glace Verte) or “Anniversary” model comes with a black dial of a slightly different design and a green-tinted sapphire crystal. The GV is the only Rolex produced with a tinted crystal. Although initially rumored to be a limited edition, the GV version is still produced nearly 3 years later.

May 29, 2013By Jonathans Watch BuyerUncategorized